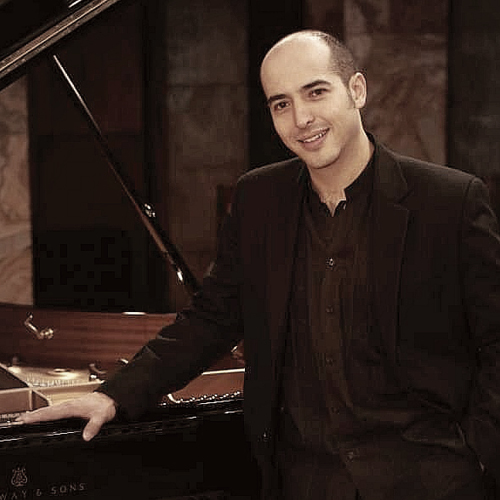 Emerging as one of the most remarkable musicians from Latin America, and known for his profound artistic poetry, flawless technique, and charismatic performances, Rodolfo Ritter has performed to critical and audience acclaim on three continents.

Mr. Ritter’s full commitment to discover and program works from neglected master composers from the past and introduce them to modern audiences has been achieved through the performance and recording of a number of world premieres. This, together with the frequent performance of standard works, provides a vast repertoire of more than 40 piano concertos and 30 solo piano and chamber music pieces. Launched in 2017, Mr. Ritter’s first CD, devoted to the great Russian-Swiss composer Paul Juon, received much praise and was also included in the Top 10 recordings by Toccata Classics on Spotify® of the same year. This CD is the first of a series of recordings that includes the world-premiere recording of integral works for solo piano by Juon. Future recordings will include piano solo works by the German Romantic composer Woldemar Bargiel and the complete solo piano works by the Mexican composer Manuel M. Ponce for the Dutch label Piano Classics.

Mr. Ritter’s performances with orchestras include a vast repertoire ranging from Bach’s Well-Tempered Clavier to the complete piano concerti of Brahms, Chopin, Rachmaninoff, and Béla Bartók to romantic, modern, and contemporary lesser-known works such as Xaver Scharwenka’s Piano Concerto Op. 32; Martinů’s Double Concerto for Two String Orchestras, Piano, and Timpani; Stravinsky’s Concerto for Piano and Wind Instruments; and the premiere of works dedicated to himself such as “Valses Romántico” and “Rapsodias Mexicana” by Gustavo Morales; “Alegoría de la Ausencia” by Horacio Uribe; “Folía Variations” by Jorge Vidales; and Concerto for Piano and Orchestra, “La Luna y la Muerte,” by Spanish composer Miguel Galvéz-Taroncher. The last work was a First-Prize winner at the prestigious Queen Elisabeth Composition Competition in Brussels, and later the compulsory work for the piano competition in 2007.

Mr. Ritter’s recordings on the Swedish label Sterling CD have received much praise by some of the most prestigious international publications, particularly the first and second volumes of the Mexican Romantics Anthology devoted to the piano concertos of Manuel M. Ponce and Ricardo Castro.