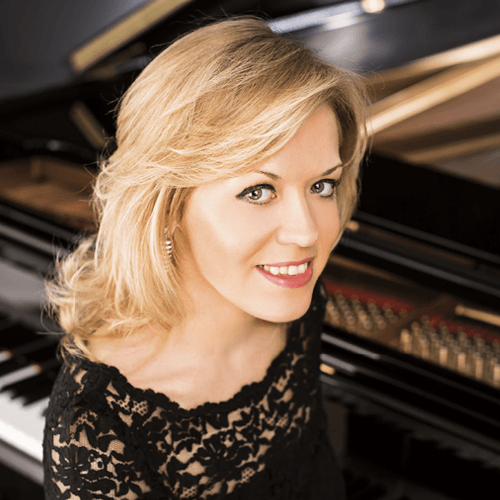 With a vivid onstage presence, dazzling technique, and keen musicianship, pianist Olga Kern is widely recognized as one of the great artists of her generation, captivating fans and critics alike.

A Steinway Artist, Olga is a laureate of a number of international competitions. In 2016, she was Jury Chairman of both the Cliburn International Amateur Piano Competition and the First Olga Kern International Piano Competition, where she also held the title of Artistic Director. In December 2021, Olga was Jury Chairman of the 1st Chopin Animato International Piano Competition in Paris, France. In coming seasons, she will continue to serve on the juries of a number of other high-level competitions. Olga frequently gives master classes, and since 2017 has served on the piano faculty of Manhattan School of Music. Also in 2017, Olga received the Ellis Island Medal of Honor (New York City). In 2019, she was appointed the Connie and Marc Jacobson Director of Chamber Music at the Virginia Arts Festival.

In 2012, Olga established the Kern Foundation “Aspiration” to help young, talented musicians all over the world.

Olga’s discography includes a Harmonia Mundi recording of the Tchaikovsky Piano Concerto No. 1 with the Rochester Philharmonic Orchestra and Christopher Seaman; her GRAMMY®-nominated disc of Rachmaninoff’s Corelli Variations and other transcriptions; and Chopin’s Piano Concerto No. 1 with the Warsaw Philharmonic and Antoni Wit. Other notable releases include Chopin’s Piano Sonatas Nos. 2 and 3 and SONY’s release of the Rachmaninoff Sonata for Cello and Piano with Sol Gabetta. Olga released a new CD in 2022 on the Delos label of Brahms and Shostakovich quintets with the Dali Quartet.

Olga is featured in award-winning documentaries about the 2001 Cliburn Competition: The Cliburn: Playing on the Edge, They Came to Play, and Olga’s Journey.

“Call it star quality—music likes Kern the way the camera liked Garbo. Her electricity at the keyboard is palpable, and though she generates it from the music itself, as it flows through her fingers, it takes on fresh voltage that is unmistakably hers.”

Olga Kern is the Artistic Director, President of the Jury, and a Founder of the Olga Kern International Piano Competition.